IS MARRIAGE AN ACHIEVEMENT? 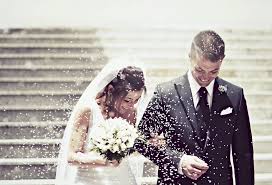 Over the years, it has been argued whether getting married is an achievement or not with everyone trying very hard to make a point. You often hear questions like ; Is marriage worth it? Does marriage change one’s social status?  Does wearing a ring and bearing a Mrs. Somebody define a woman? I have even heard people say severally that a guy isn’t yet a man until he gets married.

Questions like the ones above got me thinking and I decided to clear my head.

I remember while growing up as a young girl, I set some goals for myself which ‘must’ be accomplished at the set time. When I got admission into the university at the age of seventeen, I was more than elated to have achieved that feat at that age which wasn’t too common then. I think in my second year, I started making calculations and planning on what I wanted to do after school. I had it calculated that I was going to be a graduate at twenty-one, complete the national youth service corps scheme before twenty-three. And after service, what is next? Marriage .That was my goal. I wanted to get married not later than twenty-three. I started working towards it by being on the look- out for made and ready guys. An unmade guy as a suitor wasn’t an option for me because the target must be achieved.

Did I graduate at twenty-one? Yes I did. Completed the NYSC at twenty-three? Yes of course. Married at twenty-three?  The answer is a resounding NO. Not even an engagement ring on my finger. I was in a relationship though. But we were nothing close to getting married. Why? My then boyfriend wasn’t employed. He was working when we met, so I was optimistic that he was going to pop the question any time not long after we met. All my expectations from the relationship revolved around getting married to him. No more,no less. But hey, there was no marriage!

My thought then was that after graduating from school, the next achievement for me as a lady is to become a Mrs. Somebody. All thanks to the society to which I belong where a lady’s success story is not complete until she gets married. Being single without a boyfriend was a thing of grief for me in those days because I saw my dreams going into the trash bin. Some personal plans which could have added feathers to my cap were put on hold because I didn’t know when he was going to be ready and I would have to change my place of residence. I was afraid of starting things and abandon them half way because of marriage. So, it was better I didn’t start at all. That was my decision. Marriage was the only sure thing.

I remember weeping a couple of times when I heard someone of my age or less was getting married. How did they manage to do it? I thought I wasn’t good enough and that was why my relationships failed. Maybe it is true that beauty alone isn’t enough because I have seen ugly ladies who I thought cannot bag themselves a boyfriend talk less of a husband (May God forgive me because no one created by Him is ugly).

I saw people who are not anywhere close to me when it comes to success in other areas as the real happening people because they’ve bagged themselves husbands.  Thanks to God who opened my eyes to see that I wasn’t really ready for marriage then. I lacked certain things that will build a strong home. Apart from this, I was able to realize that I was naturally not fashioned to be a dependant. Not that I don’t ask for help, I do. But I realized that there was no way I would get married without a job. Was I ready to be a ‘daddy will soon come back wife’? No, no, no!

I was not even matured enough as I was later to find out. Who knows, maybe I would have become a divorcee or a single mum because I wasn’t fully aware of what getting married really entails.
Back to the question in focus, is marriage an accomplishment? I am very much aware that so many single ladies and guys and most especially ladies have once been in my shoes and still are. Like the proverbial saying that ‘this life is like the talking drum that has its front facing an individual but has its other side facing another .We can’t all see things from the same perspective because what I consider success might not be for another. Therefore, permit me to write from my own view.

WHAT IS MARRIAGE?
Marriage from the common definition is the coming together of two people (male and female) to become husband and wife. And if you’ll belief with me, it was ordained by God for the purpose of having mutual companionship, to avoid fornication and for procreation of children.

WHAT IS AN ACHIEVEMENT?
An achievement is considered as a successful performance. Synonyms: accomplishment, success, a feat.
From the above definition, I will like to big one of the synonyms for my talk; the word SUCCESS.

WHAT IS SUCCESS?
Success is the achievement of one’s aim or goal. We can therefore say that marriage is an achievement for someone if it was that person’s aim and he or she has been able to accomplish it.

More often than naught, I have heard people say that a marriage cannot be termed successful if it hasn’t reached certain years. Does someone’s age determine his success or the height he will go in life? My question now is that ‘do we measure a university graduate’s success by the number of years he has been a graduate or by what he has been able to achieve with being a university graduate? Just celebrate every moment and don’t be bullied by those who think you don’t have ‘donkey years’ experience. Are you searching for a job in Nigeria where you’ll be asked to have a minimum of God knows how many years of experience. It is your marriage, not theirs. My dear,that all the marriages around you failed or are failing doesn’t mean yours will be like theirs.

And please stop telling people that marriage isn’t an achievement. If yours isn’t, theirs is. Abi na your accomplishment?

Setting marriage as a goal isn’t a bad idea for anyone who desires to get married because that will actually make it easier to come to being. Though, setting a goal to get married at a certain age may probably not work out, but it does help in the pursuit of it. And once it comes to reality, it becomes an achievement.
If it isn’t an achievement, why do people celebrate wedding anniversaries? The answer is simple. They are celebrating the success so far as well as the happiness, fulfillment and companionship they’ve been able to garner in their marriages. Marriage as far as I am concerned is an achievement that is worth celebrating provided you married your friend and the both of you are satisfied with the marriage.

What I would just want you to know is that as a single guy or lady, setting marriage as a goal to be accomplished shouldn’t override every other necessary goal. Each goal should be pursued with the right amount of commitment.

And you should also know that the marriage achievement does not come from becoming the head of the family or a Mrs. Somebody. Our achievement lies in the joy, love, friendship and peace that we as individual give to our spouses regardless of the number of years we have spent together.

Get a good, undiluted and unbiased knowledge and information about what getting married means in the true sense of it. What do you want to achieve with the marriage. Are they things that will stand the test of time? Will you be proud of the proceeds? There is no way anyone will celebrate a business or venture that does not bring good profits.

Set the target. Define the purpose. Work towards making it a reality. Achieve it when you can. Nurture it. Enjoy it. Celebrate it.

Dear Hubby,here’s wishing us an accomplished married life in advance. For us, it’s going to be an achievement.

Are we on the same page on this? Feel free to put down something in the comment box below even if you don’t agree. Na free world jare. No be my fault say I love marriage.