My Boxers Ruined my Chance 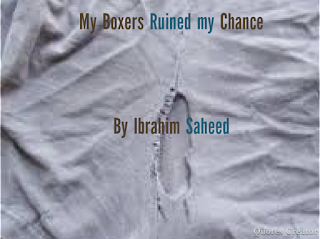 Hi lovelies, this piece is from our new booda writer o. His name is Ibro, and you know what? He can talk and write about everything and anything. Believe me when i say everything and anHe is that bad. Anyways, make I no spoil una fun jare. Enjoy this one especially all of una bros wey the inside inside thing dey get as e be.

My name is Steve. I am a guy in my early 30s and I work in one of the leading telecommunication companies in Nigeria. I have this beautiful lady, Nike in my office and she is in her late 20s. She is my crush; my fantasy. I cant help staring at her anytime I go to work. In fact, I always offer to help her out without being invited anytime I see that she is struggling with one thing or the other. She always appreciates my effort though.

Many times I invited her to lunch but many times she declined. I devised many means to get closer to her but all to no avail. Many times I had decided to let go of her but her thought and pictures always appear in my thinking and dreams. To be candid, I almost got sacked one day because I got carried away staring at her and my boss was in front of me without my knowledge. I sought pieces of advice from my friends on how to get her but all efforts were wasted. So, I decided, for the last time, to give up and I did gave up on chasing the shadow.

After two months of keeping to myself and facing my work squarely (though I do think of her but I am not showing any sign anymore), I got a text on my line: whats your plan for the weekend? I initially thought it was my guy, Kola, asking about my plans for the weekend as usual. When I checked the name of the sender, it was Nike. I couldnt believe it at first. I read the message over and over again.

You know what? I had had plans to visit one of my uncles for something very important but I cancelled the appointment. To cut the long story short, Nike and I met at the Film House Cinema to see the latest movie in town and from there; we started having one appointment or the other. This went on for about three months. My dreams have come to pass. Nike is now my soul mate. She has told me many things about her and I did same; all within a very short time. You know how love works nah.

On this fateful day, Nike decided to pay me visit at my apartment. I had cleaned the whole one room self contain apartment and I wore one of the best polo shirts I have in my wardrobe.  After many hours of gisting and playing, it started raining heavily and she couldnt go back to her place. So, she decided to put up at my place till the following morning. Well, I am not sure two matured daters can stay together over the night without making romantic gestures towards each other.

We were watching a romantic film with all the cold of this world in the room and we both went naughty. We started undressing each other and she decided to take charge. She went down to remove my pair of boxers and give me a head. But suddenly, she stopped. I was surprised she stopped and I enquired what happened. She said nothing that she was feeling dizzy and have a sudden headache. Awwww!!!! I said within me. My excited body went down with full force. Well, there will be another time, I said to myself.

After that night, things changed. Nike became a stranger. She doesnt call anymore and whenever I called, she is always busy.   I couldnt decipher what was going on until I started demanding explanations as per what is going on. When she couldnt bear my relentless disturbances, she sent a text to me one night and it reads: try to always keep the boxers clean or change it.

I felt very embarrassed. I felt I should hit my head against the wall. Just like I read her first message over and over at the beginning, I did the same to her last message. All my efforts to bring her back didnt work as she was transferred to another town two weeks after she visited me. The memory of that text and the experience that led to it still lingers in my brain.

Most guys only care about their pocket, their look and dress, but pay less attention to what they wear underneath. Some guys can make do with just two pairs of boxers for months while some guys only change their boxers after three to five days. This is a very bad idea and a sign of bad hygiene.

Boxers are coverings for the private parts and they need to be taken care of as ladies take care of their panties. Guys do not need to wait till the boxers start smelling urine before they are changed. Sometimes I see some big boys with torn or brownish white singlets. They are of the opinion that singlet and boxers dont really matter. My brother, your inner look is the replica of your level of hygiene.

The maximum number of days a guy should wear a boxers should be two days. Anything more than that, becomes bad hygiene. When a guy urinates, there will be one or two drops of urine in his boxers after that. These drops of urine accumulate over time as the guy urinates over and over. Thus, the boxers become smelly.

Also, as a guy, you need to have a minimum of 5-10 pairs of boxers. This will afford you the opportunity to change from one to another and wash the used ones. This same method goes for your singlets.