It's International day of the girl child. 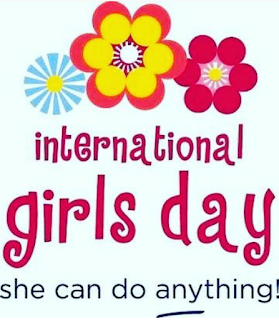 The girl child on daily basis is confronted by different challenges ,from rape, forced labour, child marriage, lack of access to education, sexual harassment and all sorts. And is always at the receiving end of harmful cultural, traditional and religious norms .

We often raise her to be what the society wants with little or no regards to her inner feelings, dreams and aspirations. And as a result, her potentials that would have been of tremendous benefits to her immediate environment and the world at large are left to rot away and same cannot be said about her boy counterpart.

A girl is not lesser than a boy. They both came into the world through the same process. She is human. Treat and nurture her like you would a boy child. The girl you raise her to be is the woman she would grow to become. While you raise her to become 'perfect' for a man, please and please raise that boy to be perfect for her as well.

Empower her like you would a boy child. Empower her to be the best she should be. Give the girls the wings to fly, not the pains to make them cry and die.

By busayo akogun - October 11, 2017 No comments:
Email ThisBlogThis!Share to TwitterShare to FacebookShare to Pinterest

Monkeypox:What you need to know

That the Monkeypox viral disease is on the rampage in Nigeria is no longer news. The disease was reported on October 5,2017 to have made its grand outbreak in Bayelsa State before spreading its tentacles to the neighbouring Rivers State. In view of this,here are some facts that we all need to know about the disease to help break its wings:

Monkeypox is an infectious disease caused by the monkeypox virus . The disease was first identified in laboratory monkeys, hence its name, but in its natural state it seems to infect rodents more often than primates .

Monkeypox as a disease in humans was first associated with an illness in the Democratic Republic of the Congo (formerly Zaire ), in the town of Basankusu , Équateur Province, in 1970.

The disease is indigenous to Central and West Africa .

An outbreak that occurred in the United States in 2003 was traced to a pet store where imported Gambian pouched rats were sold.

Small viral outbreaks with a death rate in the range of 10% and a secondary human to human infection rate of about the same amount occur routinely in equatorial Central and West Africa.

The primary route of infection is thought to be contact with the infected animals or their bodily fluids.

The virus can spread from human to human by both respiratory (airborne) contact and contact with infected person's bodily fluids.

Risk factors for transmission include sharing a bed, room, or using the same utensils as an infected patient.

Incubation period is 10–14 days. Prodromal symptoms include swelling of lymph nodes, muscle pain, headache,fever , prior to the emergence of the rash .

The rashes firstappear on the face before spreading to other parts of the body.

It can cause severe illness and quick deaths, especially in children.

Currently, there is no  treatment for monkeypox, but its outbreak can be prevented and controlled.

Close physical contact with monkeypox infected people should be avoided.

Gloves and protective equipment should be worn when taking care of ill people.

Regular hand washing should be a top priority at all times.

Ensure that you thoroughly cook all animal products (blood, meat) before eating.

Gloves and other appropriate protective clothing should be worn while handling sick animals or their infected tissues, and during slaughtering procedures.

Samples taken from people and animals with suspected monkeypox virus infection should be handled by trained personnels .

Prevent someone from being infected by sharing this message.